This 23 inch tall by 18 inch wide original photographic print is based on Brad Elterman’s iconic images “Behind the Beverly Hills Hotel, 1977”. The imagery is carefully layered until the artworks reveal a whole new reality. This artwork has been created through lithograph printing on archival paper, printed on a 120 year old printing press. Convenient local Los Angeles delivery. Affordable Continental U.S and international shipping. A certificate of authenticity issued by the art gallery is included. 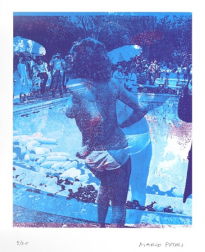