What makes Sally West’s original oil paintings so recognizable is the combination of texture, abstraction, and calming colors. The movement of her paint strokes on canvas is reminiscent of a light breeze or waves.

Each painting is completed in one day, with the date present in the title. West's textural pieces take at least eight weeks to completely dry. Once dry the thick paint takes on an almost sculptural effect. Overall, West’s color palette is uniquely her own and it conveys a very specific feeling of comfort associated with familiarity and softness.

This one-of-a-kind 39-inch square artwork is painted with thick, textural oil paint on canvas. It is wired and ready to hang. It is signed by the artist on the front lower right corner as well as the back. The sides of this artwork are painted and it is ready to hang. Free local Los Angeles area delivery. Affordable Continental U.S. and worldwide shipping are available. A certificate of authenticity issued by Artplex Gallery is included.

Sally West was born in West Wyalong, Central New South Wales. West grew up on a farm and as a teenager moved to Eastern Sydney for school. Throughout her life, she has traveled through and lived in both Europe and South East Asia to gain inspiration for her artwork. Although her international journeys have influenced her style, the subjects of her paintings are very close to home. The subjects of all of her paintings exist in an infinite timeline inspired by her location in Eastern Australia.

Since West’s first breakthrough solo exhibition in New York in 2011, her artworks have become highly sought after internationally. She has won and placed as a finalist in numerous worldwide art competitions and juried exhibitions throughout her career. Her artworks are exhibited in influential galleries across Australia and the USA and are included in significant art collections around the globe. 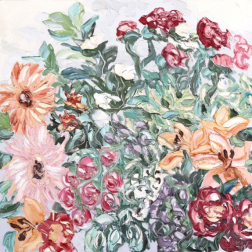